A concussion is a form of traumatic brain injury resulting from a blow, or a bump, or a jolt to the head that makes the head and brain to move swiftly back and forth. A concussion may also result from a hit to the body. The sudden movement of the head and brain causes the brain to twist or bounce around in the brain, thus, stretching and damaging the brain cells. This movement can create chemical changes in the brain.

Concussions should not be taken lightly. Though they are not, alone, life-threatening, they can have effects that are grave.

Due to the chemical changes that may result, concussions may cause victims to become unconscious. Though anybody can become a victim due to a fall, car accident, etc., concussions are more likely to affect people who participate in contact or impact sports such as boxing or football.

The Symptoms of a Concussion 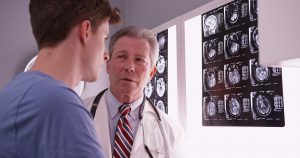 The signs and symptoms of a concussion usually include headache or feeling pressure in the head, confusion or feeling like he you are in a fog. Patients experience temporary loss of consciousness, amnesia- where patients often forget the cause of the concussion. They may also suffer from ringing in the ears, dizziness, nausea, slurred speech, appearing dazed, delayed response to questions, vomiting etc. While some of the symptoms of concussions can be immediate, others are delayed in onset by up to days after injury. The symptoms that may be delayed include sensitivity to light and noise, irritability and some personality changes, concentration and memory complaints, disorders of smell and taste, psychological problems and depression and sleep disturbances.

The treatment for a concussion usually depends on the severity of the symptoms you experience. Where there is bleeding in the brain, swelling of the brain, or serious injury to the brain, you might need surgery. Save for that, most concussions do not require surgery or major treatment.

For the first twenty four hours after the injury, the doctor may require someone to wake you up every two to three hours. This is a way to ensure you do not drift into a coma as well as allowing the person waking you to check for any signs of severe confusion or any other abnormal behavior.

Just in case the concussion is causing headaches, the physician may recommend some over-the-counter pain relievers such as acetaminophen (Tylenol), ibuprofen (Advil). The doctor will likely ask you to get enough rest, avoid strenuous activities and sports, and avoid driving automobiles or riding bikes for 24 hours or for some few months, according to the severity of the injury. You should also avoid alcohol as it might slow recovery if you continue drinking it. Most importantly, do not embark on strenuous or impact sport until full recuperation and at the advice of your physician.

We are extremely grateful to our sponsors – places like the fantastic nerve pain treatment centers at QC Kinetix– for helping us get our blog going.